Elizabeth was born to Mary Florence Dennison and Joseph Quinn. She and her brother Joseph were raised in Verdun where they attended St. Willibrord School and Parish. Elizabeth graduated from Notre Dame Mother House, obtained a Bachelor of Education from McGill University, majoring in Religious Studies. Additionally, she obtained certificates in the teaching of Mathematics and Art from Concordia University and graduated with a Certificate in Pastoral Animation from the University of Montreal.

Elizabeth is married to Alfred Mackay. She is retired after 32 years as an elementary school teacher and currently enjoys spending time with her husband at their country place.

Elizabeth has been active in the Irish Community for close to 30 years. She filled several positions on the Executive Committee of the United Irish Societies and led the organization as its president in 2000 and 2001. She continues to be an active participant on various committees including the Queen’s Selection Committee, the Banquet Committee, and the St. Patrick’s Parade Committee. She is a member of the St. Patrick’s Society of Montreal and of Innisfail Social and Sports Association

Elizabeth has been volunteering during most of her lifetime. She has served on the Executive and Board of Directors of Catholic Community Services and is presently the President of the Board of Directors of St. Antoine 50+ Community Center. She enjoys all things musical, and has entertained at various events. She has several hobbies involving needlework and sewing and makes many of the sashes you see worn by parade participants and dignitaries both in Montreal and Toronto.

In 2008 Elizabeth received the Liam Daly Heritage Award in recognition of her continued devotion and generosity entertaining others and in 2015 served as Chief Reviewing Officer of the annual parade.

The United Irish Societies is pleased to present Elizabeth Quinn as the Grand Marshal of the 2018 St. Patrick’s Parade. 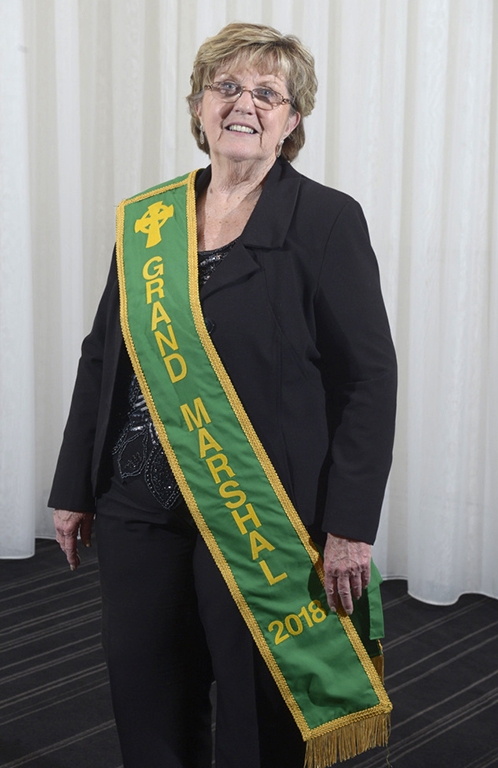