Born in Joliette, Quebec in 1963 to Elphege Coderre and Lucie Baillargeon, Mayor Denis Coderre’s love affair with Montreal truly started when the family moved to Montreal North in 1973. His Irish roots stem from his maternal side. John McCabe who was born in County Cavan in 1816 and is believed to have emigrated to Canada in 1842. Mayor Coderre is married to Chantale Renaud and together they have two children, Geneviève and Alexandre.

After attending high school and CEGEP in Montreal and earning a Bachelor of Arts in Political Science at the Université de Montréal as well as an MBA at the University of Ottawa, the calling of political life ended in defeat in his first attempt. He persevered through several more campaigns before being elected in 1997 as a Member of Parliament for the Bourassa riding. He was re-elected five more times and held Cabinet positions such as Secretary of State for Amateur Sport, President of the Queen’s Privy Council for Canada, Minister responsible for Immigration, La Francophonie and for the Office of Indian Residential Schools Resolution. As Minister of Immigration he supervised the application of the Immigration and Refugee Protection Act and as Secretary of State for Amateur Sport he helped in the establishment of the World Anti-Doping Agency in Montreal.

In 2013 Denis Coderre resigned from Federal Office to run successfully for the position of Mayor in Montreal’s municipal elections held that November. In addition to being Mayor of the Montreal metropolitan community he is also Mayor of the Ville-Marie borough, which includes the downtown sector, and member of the Executive Committee. In 2015 he became president of the Metropolis – the largest international organization of cities and metropolitan areas with more than one million inhabitants.

Shortly after his election, Mayor Coderre was introduced to Montreal’s strong Irish community. He received a call from the Lord Mayor of Dublin early in his mandate, asking Montreal to join the Worldwide Greening Initiative. Aware of his Irish heritage he gladly accepted by turning City Hall emerald green. From then on, he has been one of our community’s strongest supporters, attending the many events held in the community, by helping in the background where he can, and by publicly supporting both locally and internationally North America’s longest consecutively run parade and Canada’s largest.

In 2016 Mr. Coderre jumped in with two feet. He led an Ireland Canada Chamber of Commerce initiated trip to Ireland, returning home with a historic Friendship & Cooperation Agreement with the city of Dublin – making Montreal and  Dublin sister cities. On his trip he also had the opportunity to visit his ancestral home of County Cavan, the first in his line ever to do so.

Our friends in Ireland were honoured to meet and host Mayor Coderre as we are honoured and proud to have him as Grand Marshal of Montreal’s 194th Consecutive St Patrick’s Parade. 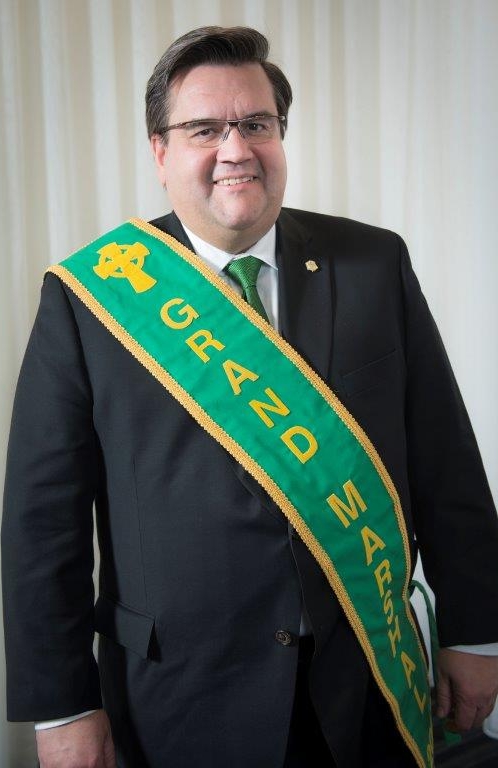